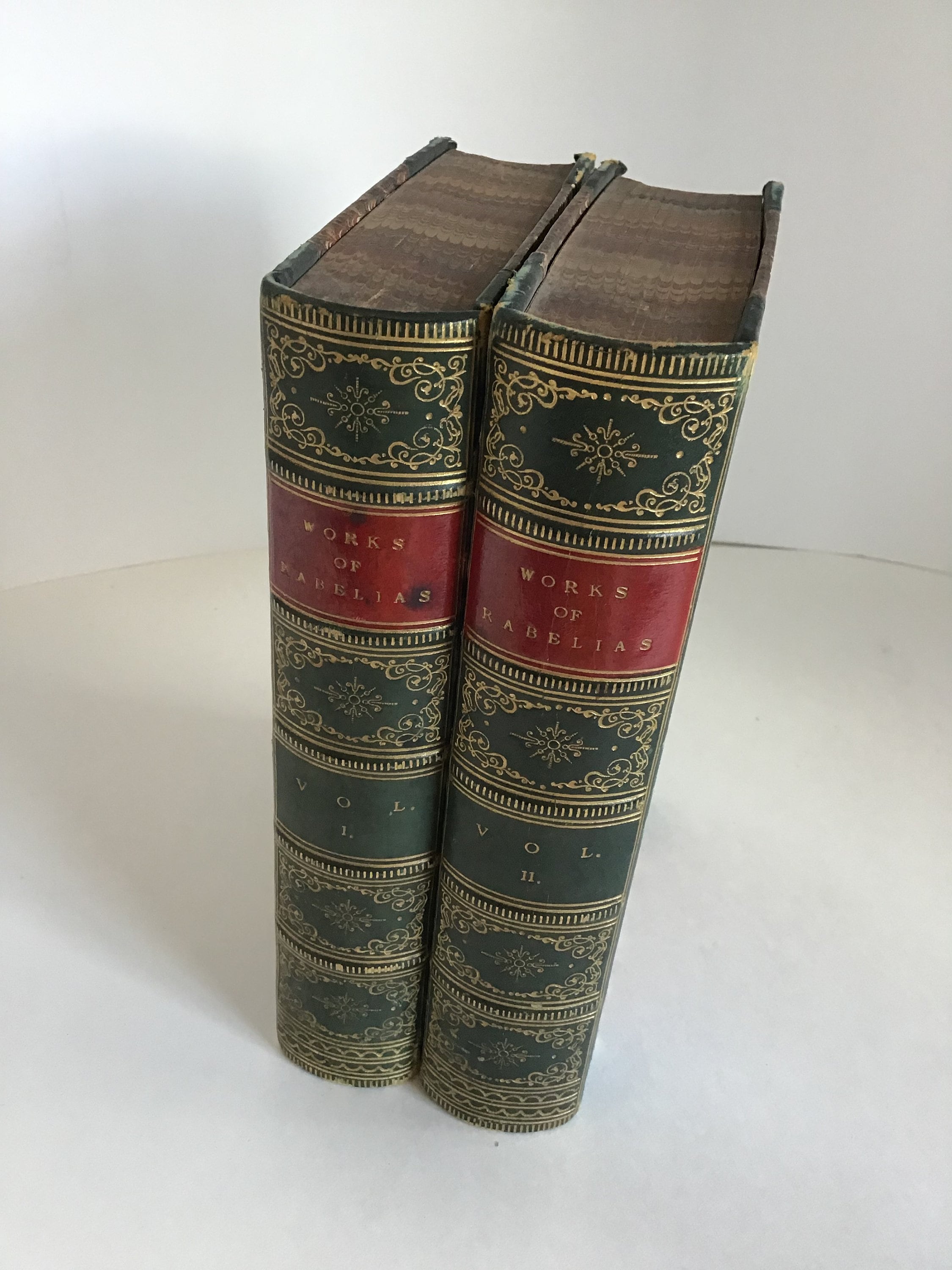 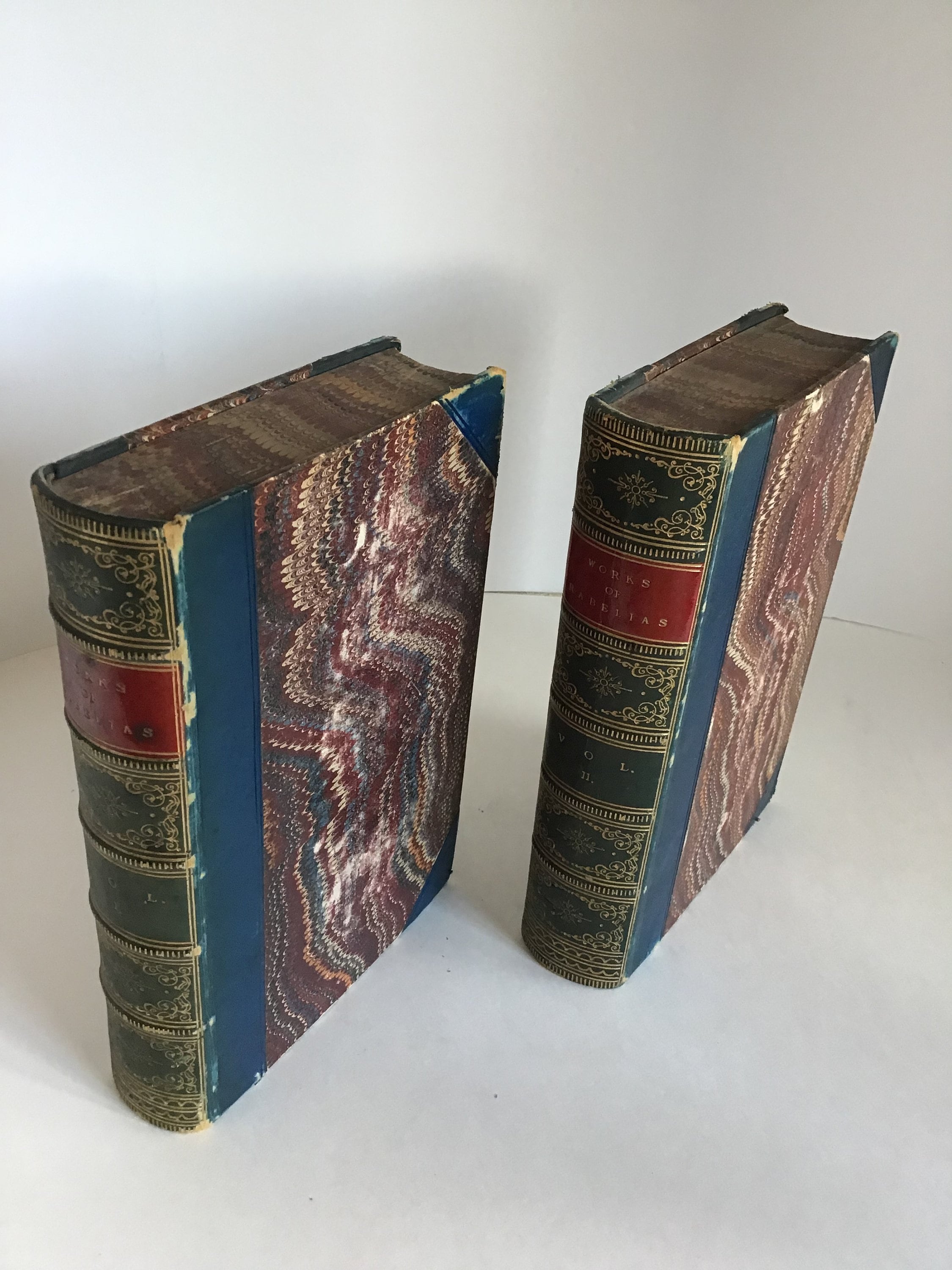 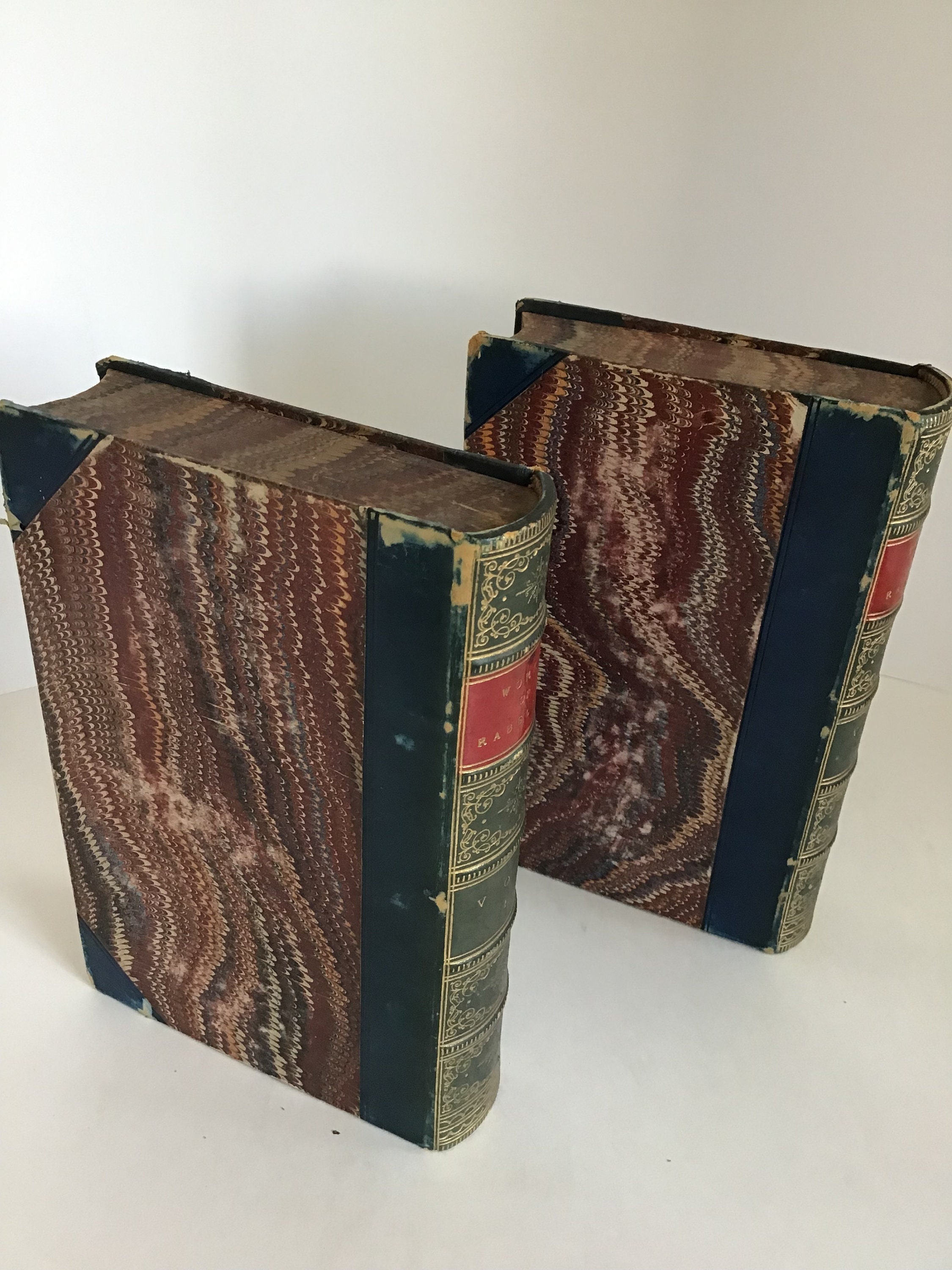 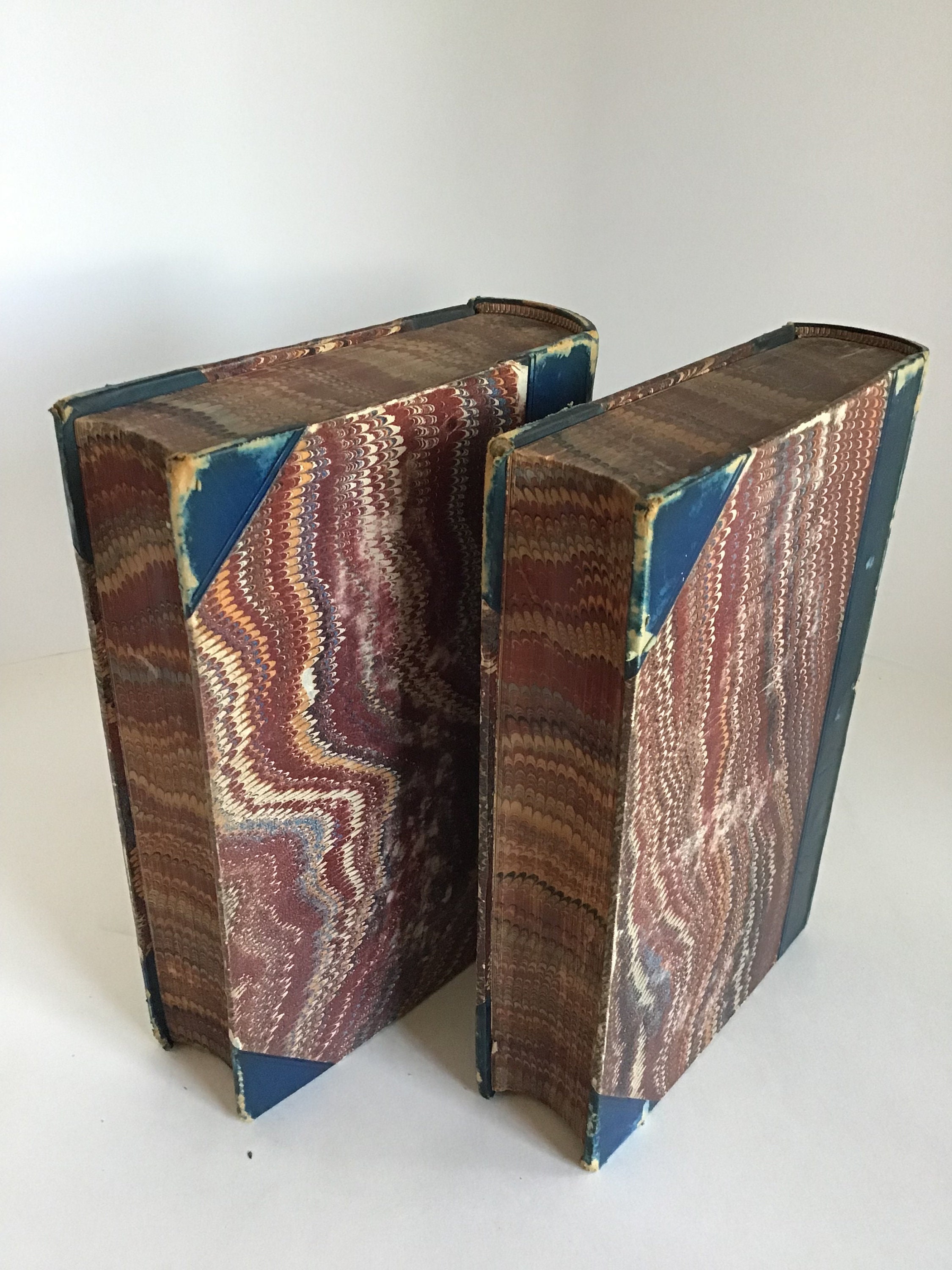 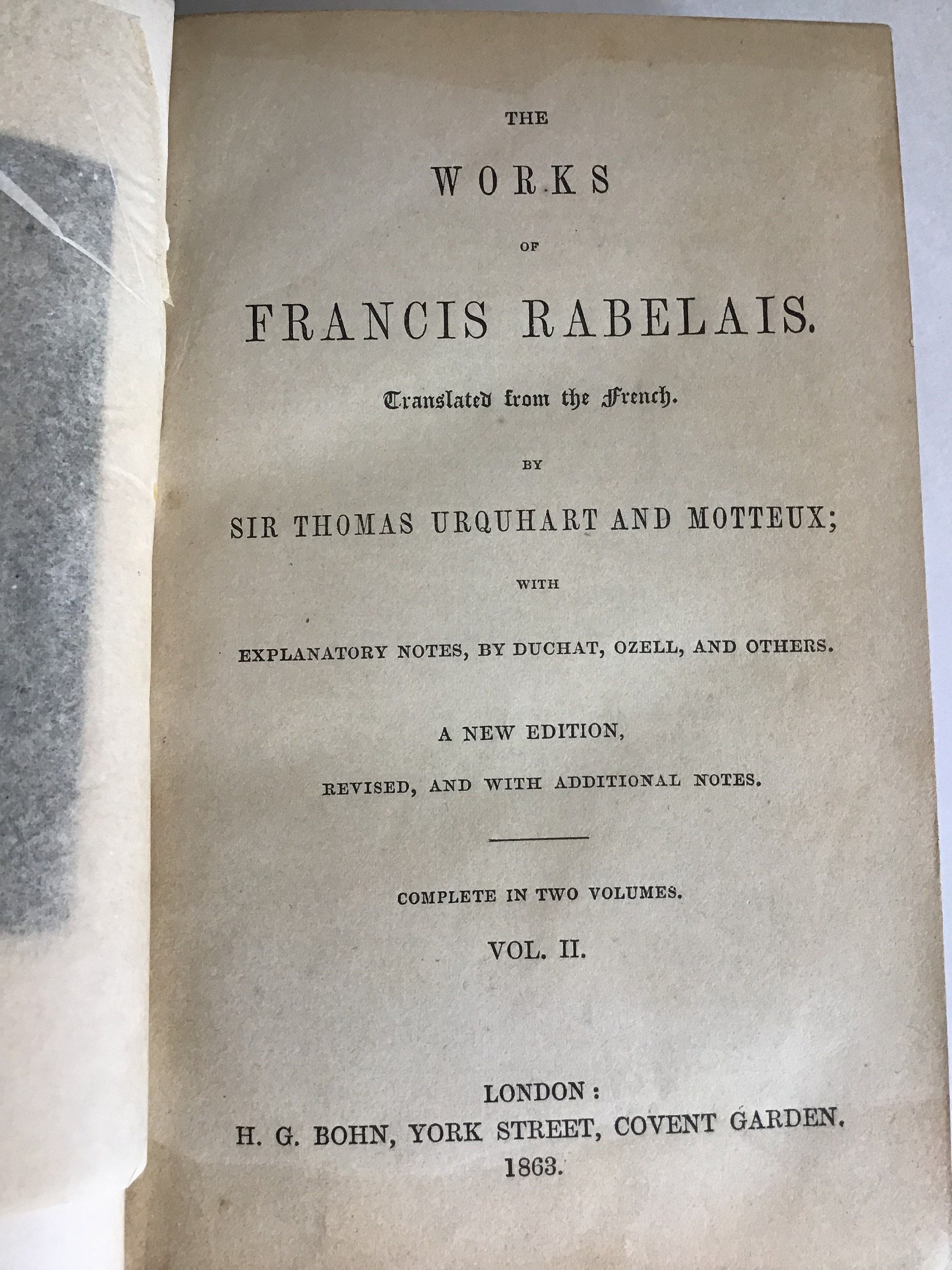 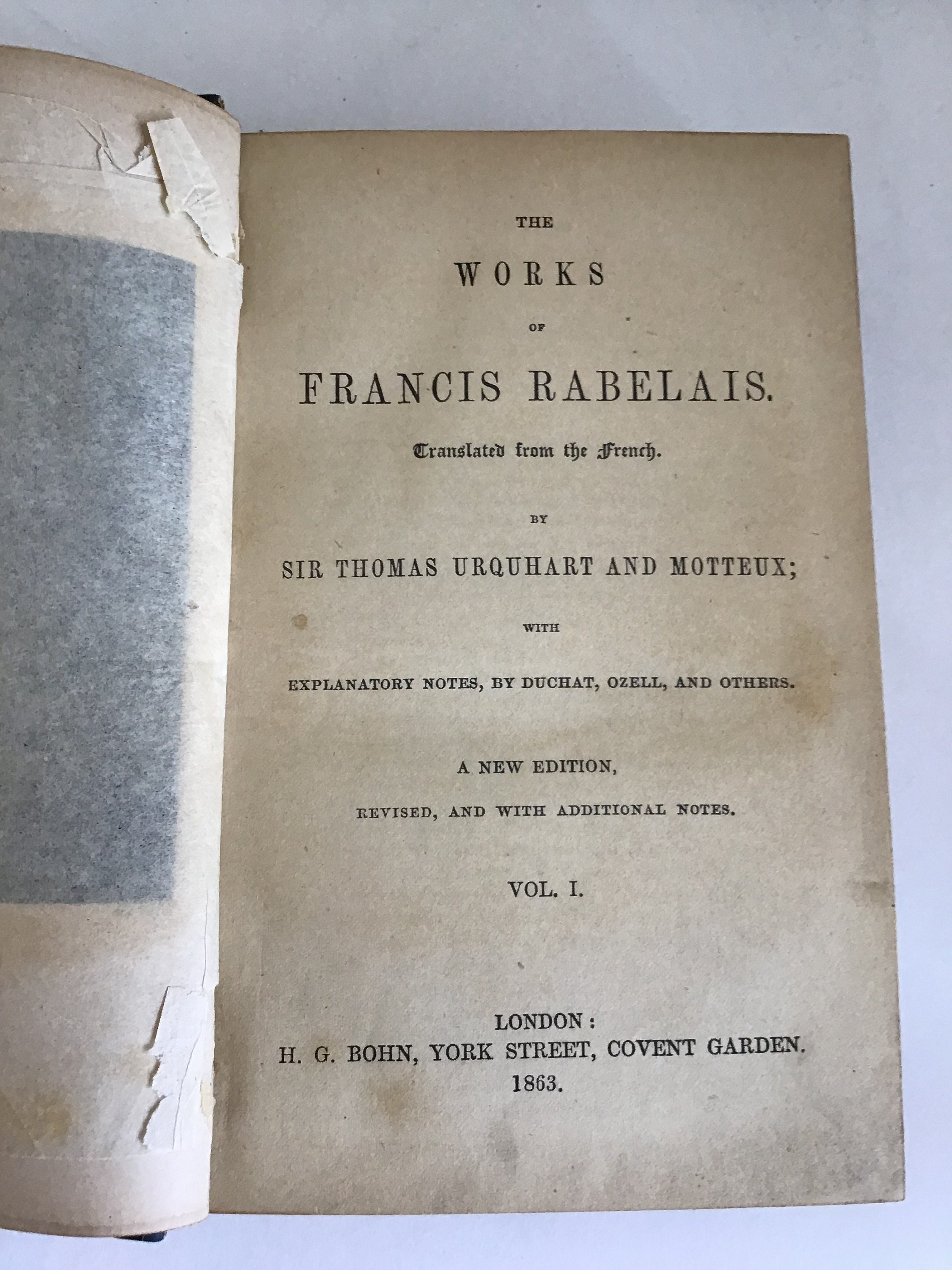 This is a very good set of two rare hardcover books. Volume One and Two of The Works of Rabelais translated from the French by Sir Thomas Urquhart and Motteux with explanatory notes by Duchat, Ozell, and others. 1863 H.G. Bohn Publishing London. Both copies are very good. Light natural tanning to pages from age but clean and unmarked. This two volume set includes the five books of Rabelais. This edition was considered the "new" edition revised, with additional notes. Binding is tight and straight on both. Beautiful marbled cover with leather as well as marbled front and back endpaper. Pages edges all three in marbled swirl. Handsome editions in very good condition. There is light wearing on corners of both front hardcovers as shown in pictures. (please see shipping notes as signature confirmation will be needed for delivery)

Rabelais was a French Renaissance writer and physician. He has historically been regarded as a writer of fantasy and satire. Best known works include Gargantua and Pantagruel. Considered to be one of the great writers of world literature because of his literary and historical importance. The first of his Gargantua series was published in 1532. The idea of basing an allegory on the lives of giants came from the folklore legend that was being published as popular literature at the time. His other major work, Pantagruel is based on a philosophy " eat, drink, and be merry" known as Pantagruelisme. Gargantua and Pantagruel tells the story of the adventures of Gargantua and his son Pantagruel. The books are humorous, wildly fantastic and frequently absurd, yet have serious passages famous for humanistic ideals of the time, such as Gargantua's youth and letter to his son.

Contents of Vol I include the Life of Rabelais, some learned mens opinions of Rabelais, Book One; Treating of the Inextimable Life of the Great Gargantua, Father of Pantagruel and Book Two Pantagruel, King of the Dipsodes with his Heroic Acts and Prowesses.

Contents of Vol II Book Three Treating of the Heroic Deeds and Sayings of the Good Pantagruel, Book Four and Book Five.

Ships USPS mail boxed with insurance. ****Signature confirmation will be needed for delivery**** We love our books and want you to love them too!! Thank you for looking